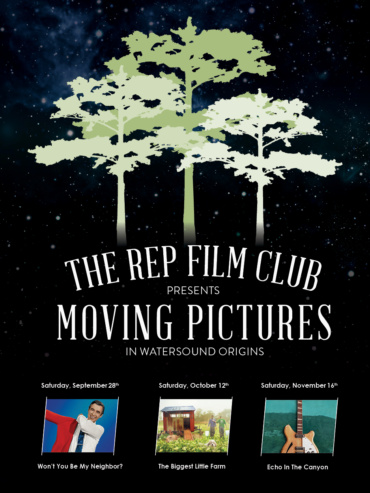 Located at the Village Commons Lawn at Watersound Origins
530 Pathways Drive, Watersound, FL 32461
Show Time: 7 pm
Free to the public
Saturday, October 12th: The Biggest Little Farm
The Biggest Little Farm chronicles the eight-year quest of John and Molly Chester as they trade city living for 200 acres of barren farmland and a dream to harvest in harmony with nature.Through dogged perseverance and embracing the opportunity provided by nature’s conflicts, the Chester’s unlock and uncover a biodiverse design for living that exists far beyond their farm, its seasons, and our wildest imagination. Featuring breathtaking cinematography, captivating animals, and an urgent message to heed Mother Nature’s call, THE BIGGEST LITTLE FARM provides us all a vital blueprint for better living and a healthier planet.
Saturday, November 16th: Echo in the Canyon
Echo In The Canyon celebrates the explosion of popular music that came out of LA’s Laurel Canyon in the mid-60s as folk went electric and The Byrds, The Beach Boys, Buffalo Springfield and The Mamas and the Papas gave birth to the California Sound.  It was a moment (1965 to 1967) when bands came to LA to emulate The Beatles and Laurel Canyon emerged as a hotbed of creativity and collaboration for a new generation of musicians who would soon put an indelible stamp on the history of American popular music.
+ Google Calendar+ iCal Export