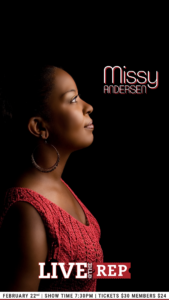 International touring Soul-Blues Americana duo Missy Andersen and her accompanist/husband, Heine Andersen, love what they do. Keeping a heavy touring schedule, the tenacious twosome performs as a duo which showcases the couple’s individual and combined talents. A charismatic performer known for her expressive and earthy vocals, Missy Andersen, received the coveted Blues Music Award nomination for Soul Blues Female Artist in 2015 and 2016. Her sophomore album, In the Moment, received rave reviews from both critics and fans and ended up on the Roots Music Report’s Top 50 Albums. The two have shared the stage with the likes of Los Lobos, Mavis Staples, Taj Mahal, and Brian Setzer.